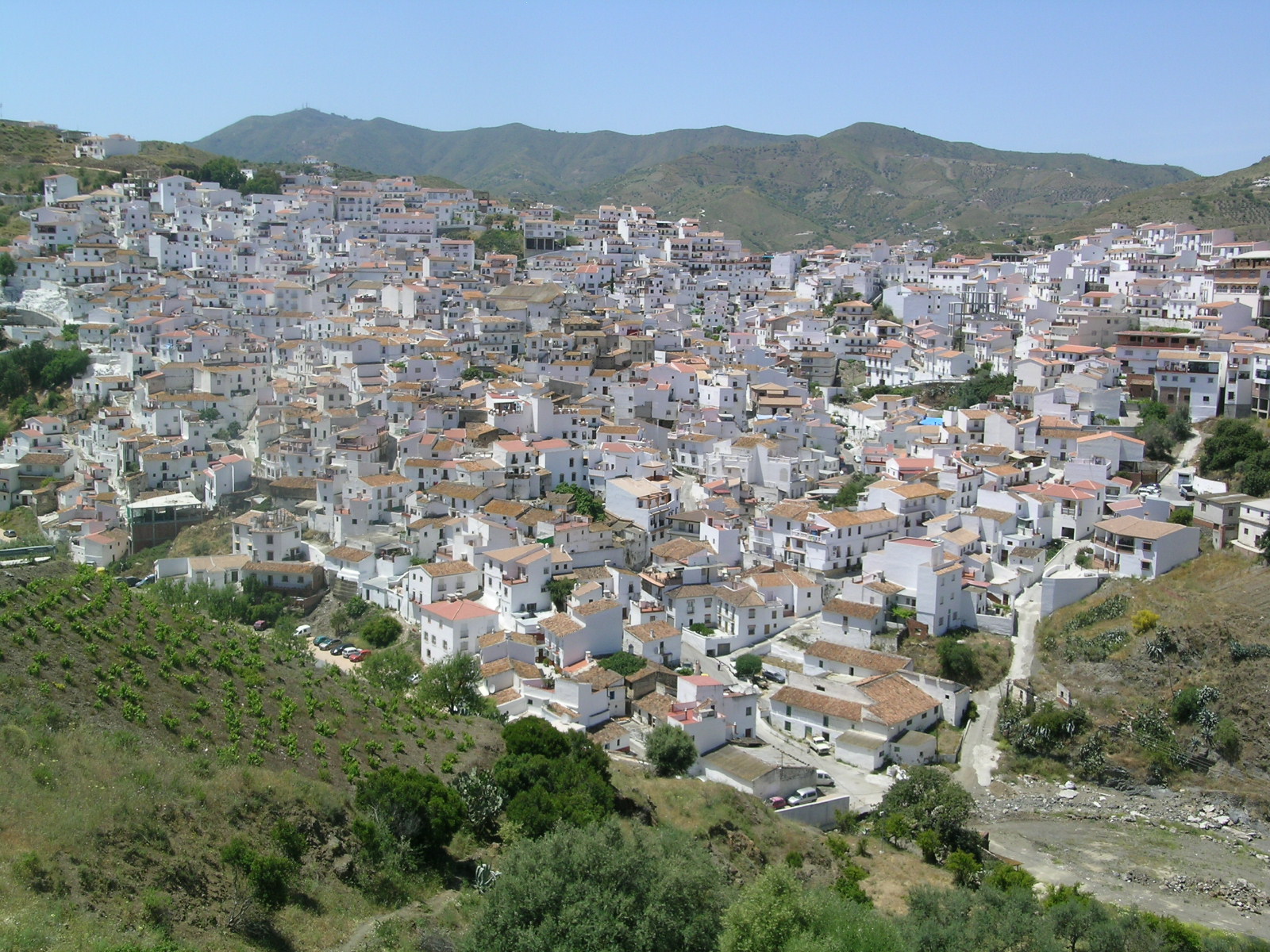 Almáchar is situated 35 km from Málaga and 20 minutes from the sea. Almáchar derives from the Arabic “Al Maysar” meaning “The Meadows” and the village used to be known as Almáchar de la Cruz because of the cross that stood on a nearby hill. The symbol is still incorporated in the towns coat of arms. Almáchar formed part of the “Four Villages” during Moslem occupation along with Cútar, El Borge and Moclinejo who were all under the protection ofComares. Following the re conquest in 1487 their dependence on this town continued.

Almáchar is the capital of the muscatel grape area and the natives are called Almachareños who speak with a distinctive guttural and jerky dialect, which as a foreigner is quite difficult to understand. The entrance to the village is marked with a new fountain surrounding an enormous silver bunch of grapes standing majestically in its centre, surrounded by flowers. This is also the entrance to the enormous car park. It is possible on normal days to drive up the hill and into the village where there are a few places to park before taking a stroll through the steep, winding streets but on special days like the first Saturday of September when the village celebrates the Día del Ajoblanco, it’s impossible to get anywhere near the centre of the village. On those days the car park is filled with coaches from all over Andalucía as people come to sample the delights of this famous cold garlic and almond soup. Officially designated a Festival of Tourist Interest this day starts at about 12pm and although people can be found walking in all directions there are signs with arrows to show you the direction of all the many stands handing out this delicious, free soup, complete with a bunch of grapes, a nice but important touch as the soup itself is a little sickly if you have too much!

Villagers believe in a myth that somewhere, hidden in a cave underneath one of the fountains near the river, guarded by a spirit, is a horde of jewels and gold left behind in 1497 by the retreating Moors. There are many interesting places to visit as you stroll through the narrow streets such as the Jardines de El Forte, the Barrio de las Cabras and the Plaza del Santo Cristo with the Museo de la Pasa which shows the way of life over the past 500 years demonstrating how the whole family were involved in harvesting the grapes.

The 16th century church of San Mateo combines Gothic, Renaissance and Mudejar architecture. It was built in three columned naves with peaked arches. The ceiling structure is different on the central and outside naves with the central one hiding its structure beneath a paneled arch with a vault in the shape of a cross.

Villagers are friendly and helpful and love to chat and help you to explore their town, pointing out places of interest and showing you property available for sale. Each person you speak to will have their own idea of the price and be warned that the millions they are talking about are pesetas not Euros, a currency they have still not come to grips with!

3 bedroom village house situated on 2 floors with 2 entrances. Large terrace. The property was recently renovated and is ready to move in.