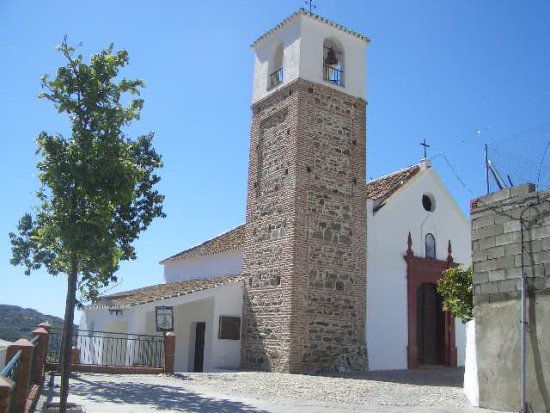 The very name conjures up images of pantomime fairies and cats! However the Romans named it La Paloma, the Pigeon! The villages perches, perhaps a little pigeon like, 600metre above sea level, with spectacular views of the Sierra Tejeda, Almijara and Alhama as well as the verdant valley below. It is situated 16 km from the coast and is probably the smallest of the Pueblos Blancos to be found in the Axarquía.

Not much is known about the origin of the village but in 1493 catholic monarchs gave the village to Diego Fernandez of Cordoba, second Earl of Cabra, as payment for his services during the re-conquests final years. Later the Medinaceli family owned it until 1811 when the Parliament of Cadiz banned family ownerships. From then it had its own council until 1868 when it was joined with Sayalonga.

During the years 1884 – 86, Corumbela like Sayalonga and some coastal areas suffered from an outbreak of phylloxera, the disease which destroyed the vines. This and a series of earthquakes during this time resulted in most people leaving the area. Nowadays it’s a sleepy village with about 300 inhabitants. One of the most striking things about the village is the church with its Mudejar style minaret. Apart from that there is only a small bakery and Meson Los Arcos a bar-restaurant.

For more entertainment Archez is a few minutes’ drive away with plenty of restaurants and bars. Or the bustling much larger village of Cómpeta is not far away.

Corumbela is 49 km from Málaga and is on the Mudejar route of the Axarquía. The easiest way to get there is either to drive past Arenas and Daimalos, or up past Algarrobo and Sayalonga then turning left for Archez and carrying on over the bridge to Corumbela.