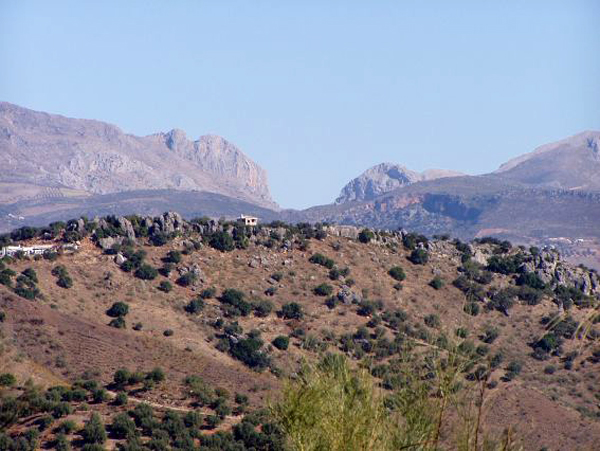 Although (Ventas de) Zafarraya is the gateway to the Granada province and not in the Axarquía at all, it is only just outside La Comarca. As you leave the flat roads of Granada province and pass through this gateway, the view drops down in front of you from 906 m to the sea shore at Torre del Mar. This view takes in everything, the peaks of Tajo de la Cueva and El Morron de La Cuña, the hamlets of Espino, Los Morales, Los Cortijillos and Los Pavitos, little dots of white amongst the yellow Aulaga, Gayombas and Cardillos and the green Tomillo and wild Espárragos. The larger village of Alcaucín and the Parque Natural, La Maroma and then the valley leading down to the lake and the sea beyond. The famous Neanderthal jaw bone, teeth and tools were found in la Cueva del Boquete, a cave that was excavated between 1983 and 1992. This archaeologist find has disproved the theory that Neanderthals were replaced by modern humans as these bones were dated to 30,000 years ago proving Neanderthals co-existed with modern humans in Western Europe for nearly 10,000 years.

There are two Zafarrayas, the first one you come across as you drive through the pass is Ventas de Zafarraya, named for the Ventas (Inns) that served the many weary travelers who changed their exhausted horses and took shelter and refreshment before travelling onto to Granada. The other Zafarraya is just 3 km to the left and the most significant building that towers above this small village is its ruined church which is floodlit at night. Destroyed during the earthquake in 1884, it has such a romantic feel to it that the church services held here amongst the ruins would be preferable to those held within the church that was built to replace it at the end of the 19th century by general Narváez with money coming in from Cuba, which was at that time a Spanish colony. In the main square in Ventas de Zafarraya is the Iglesia de Santa María de los Dolores.

Having driven up to Zafarraya it’s a shame to just drive back again so why not take a lovely walk along the disused railway line which in the glory days at the start of the 20th century linked Periana to the Ventas de Zafarraya. Work on the line started in 1911 but was not completed until 1922 and ran for only 38 years before being closed in 1960.